The Most Beautiful Churches Around Santa Fe

New Mexico’s beautiful terrain not only influences the culinary culture, the art, and the architecture of the town, but has influenced some of the most beautiful churches in the entire southwest. From old traditional cathedrals to environmentally conscious monasteries that were built to reflect the environment, there are stunning churches dotted all around Santa Fe.

In the Barrio de Analco Historic District of Santa Fe lies the oldest standing church in America, the San Miguel Mission. The earliest documentation of the church was in 1628, however most believe the church was built in 1610 by the Tlaxcalan Indians who learned about Catholicism from the Spanish colonists. Over the last 400 years, the church has been damaged and reconstructed several times due to revolts and natural events. Today, preservation is of utmost importance and you can visit the church Monday-Saturday or attend Mass on Sundays.

Just north of Santa Fe in the small community of Ohkay Owingeh lies the first and oldest Parish in the United States. Throughout the centuries, different churches have been built and destroyed, only to be rebuilt again. The church standing today is a stunning traditional red brick church that stands tall in the town. Every Sunday over 1,200 people attend mass within these walls.

Tucked in the Taos Valley at the base of the Sangre de Cristo Mountains lies the San Geronimo Chapel, a Native American pueblo that is both a UNESCO World Heritage Site and a National Historic Landmark. While much of the original chapel has been destroyed over the years, you can still see the remains of the sandstone kivas, belltower, and outline of the nave. The new church is built within the old pueblo and while it has adapted some of the more traditional building elements, it still represents an important piece of New Mexican history and culture.

One of the most recognized and visited churches in the entire Southwest is Santuario de Chimayo, a holy church that attracts hundreds of thousands of pilgrimage visitors each year. Adobe bell towers surround the elegantly carved doors that lead visitors to the colorful nave. Every year on Holy Thursday and Good Friday people from all over America come to this church to seek blessings and many take a small amount of holy dirt home with them in hopes of a miracle.

The Cathedral Basilica of St. Francis of Assisi

The Cathedral Basilica of St. Francis of Assisi is one of the most recognized buildings in Santa Fe. The twin towers at the front of the cathedral are unique to the Santa Fe downtown and are a sight to behold from the outside. Step inside and the intricate New Mexican detail on the ceilings, arches, and pillars will take your breath away. You can attend Mass or confession or peacefully enter on your own when celebrations or reconciliations are not in session.

The Monastery of Christ in the Desert

If you weren’t looking hard enough, you may not even notice Christ in the Desert Monastery Church nestled in the hills of Abiquiu. This remote monastery was built in 1964 and was designed to compliment and reflect the red hills that surround it. This passive-built church is mostly solar powered and collects energy from natural sources to reduce stress on the surrounding ecosystems. At the center of the Cloister stands a sandstone and red rock tower which is surrounded by large windows allowing guests inside to gaze upon the red cliffs and sky. 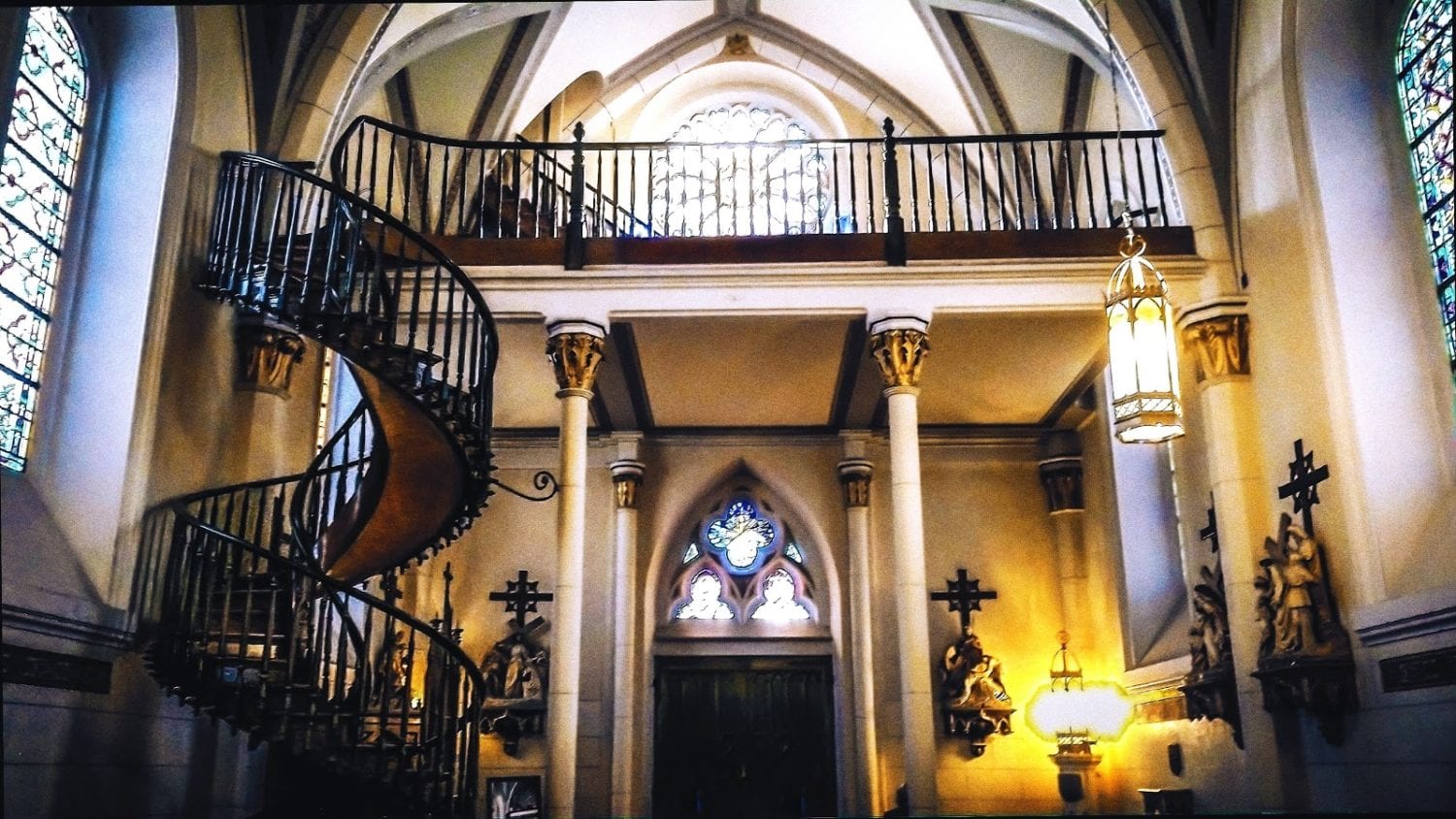 One of the most beautiful churches in the entire state lies in the heart of historic Santa Fe. This gothic-style cathedral is built with a mix of French and Southwestern influences. Inside you’ll find ornate decorations and stylings that reflect the greatest churches built in the world and a rare spiral staircase. Check the schedule before you plan your visit because even though this chapel is open 364 days per year (closed Christmas), it is one of the most desired wedding venues in town and can close to the public for extended periods of time.

Santa Fe has some of the most vibrant churches in the world, each built with their own individualistic style. It may be difficult to pick which one to attend for your Sunday Mass, but you can visit any of these architectural pieces of history throughout your stay.

Give The Gift of Casa Escondida This Holiday Season

Give your loved one an exceptional gift of a stay at our B&B.  We offer gift certificates in many amounts.